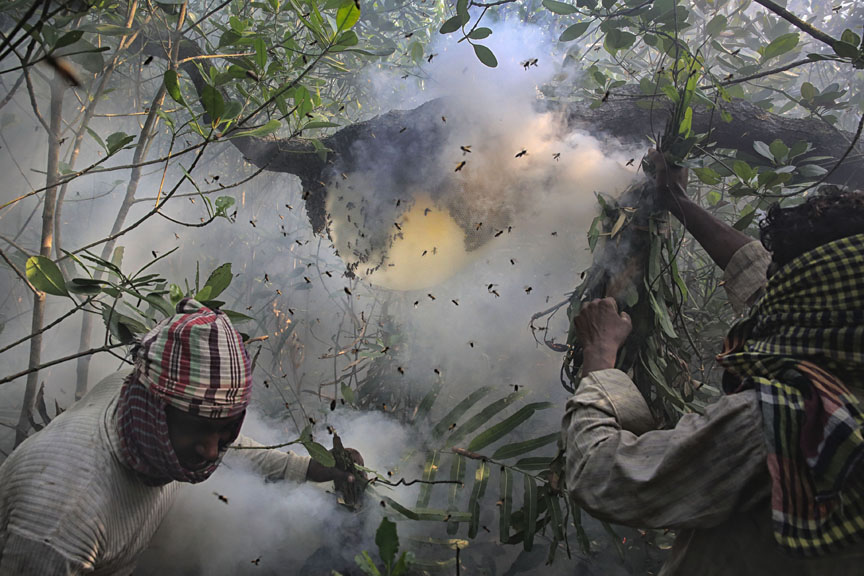 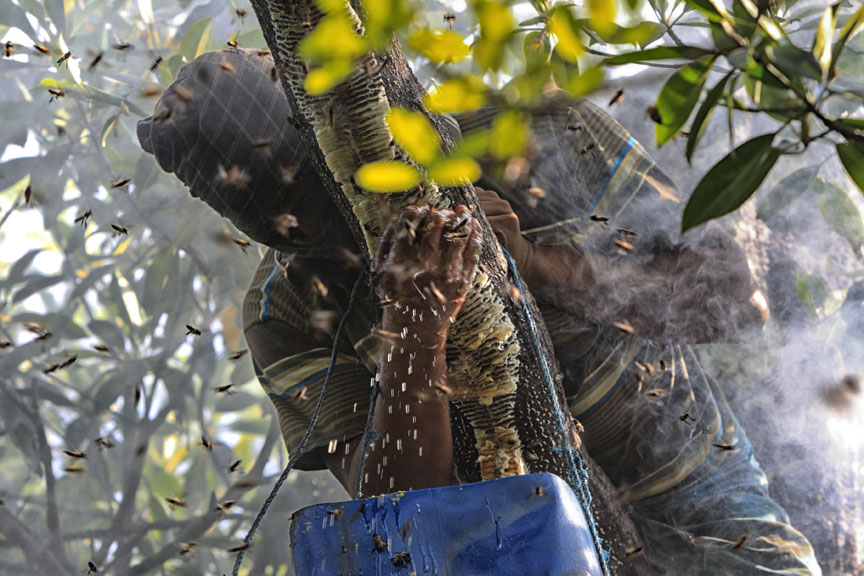 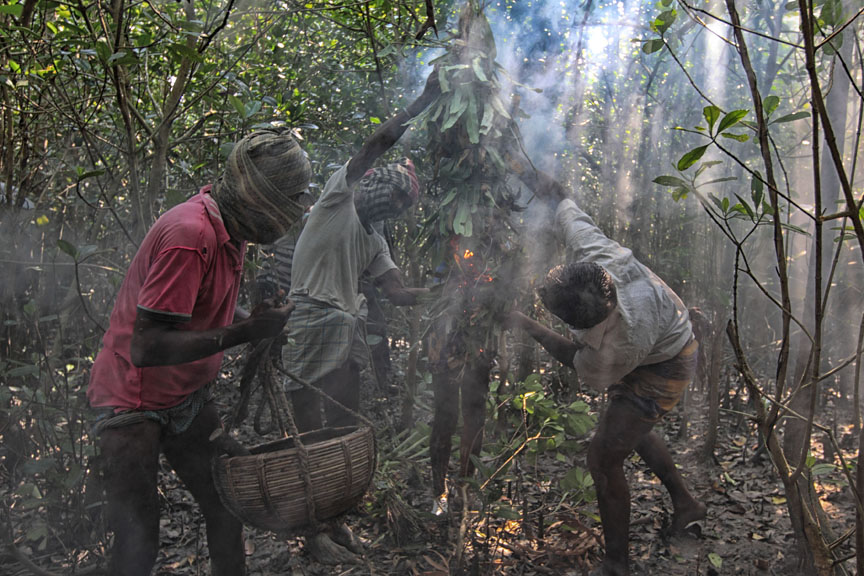 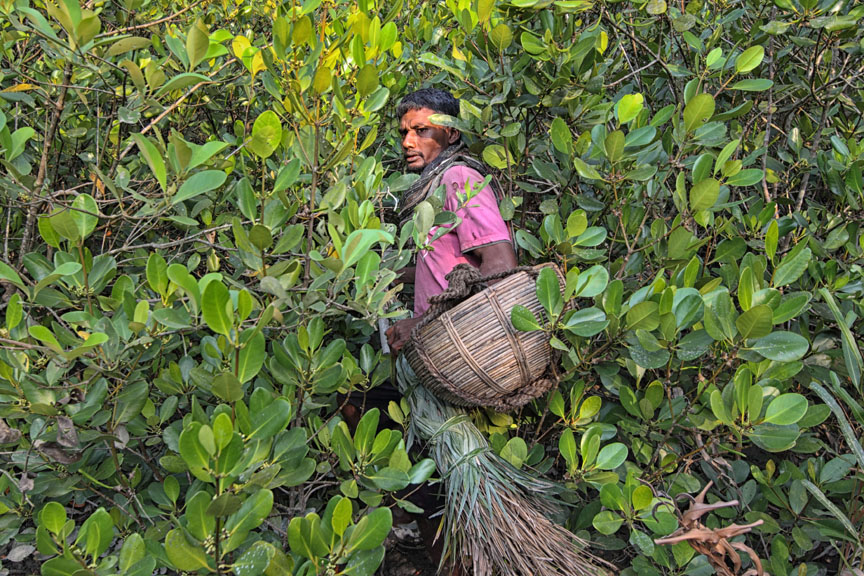 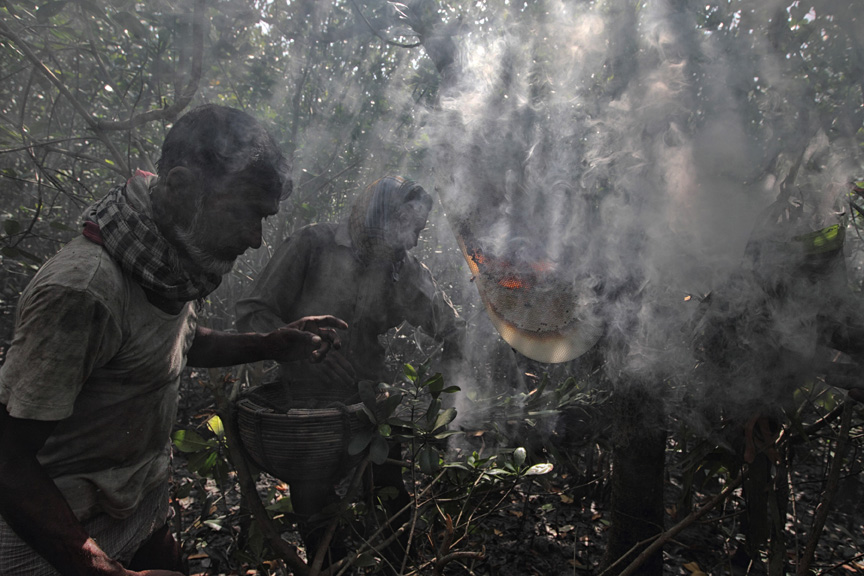 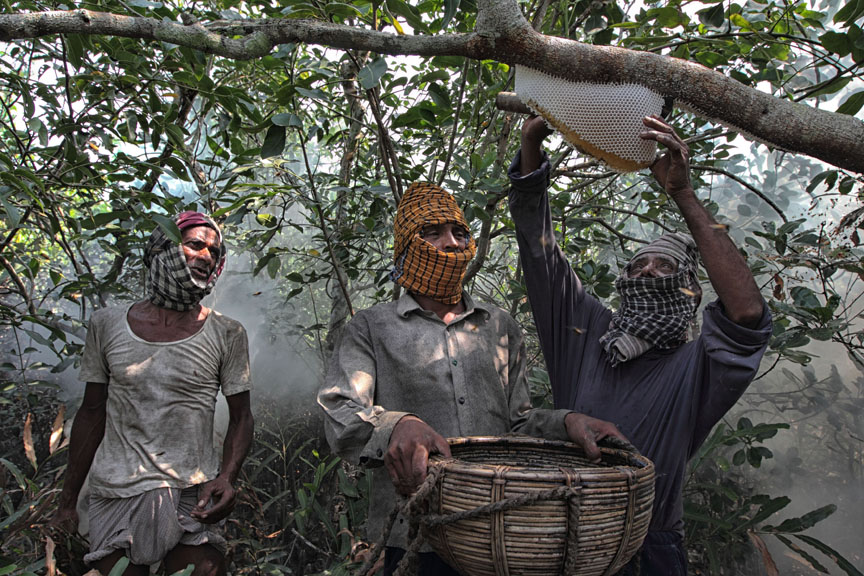 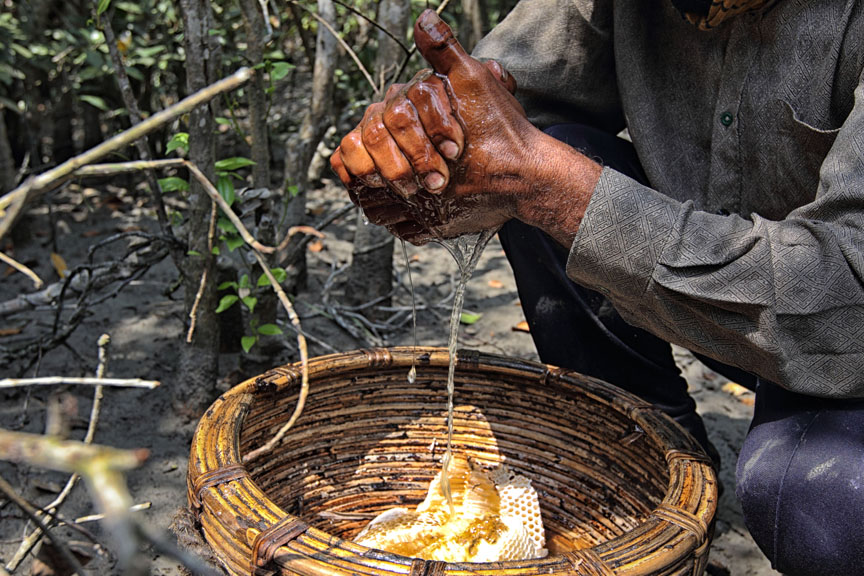 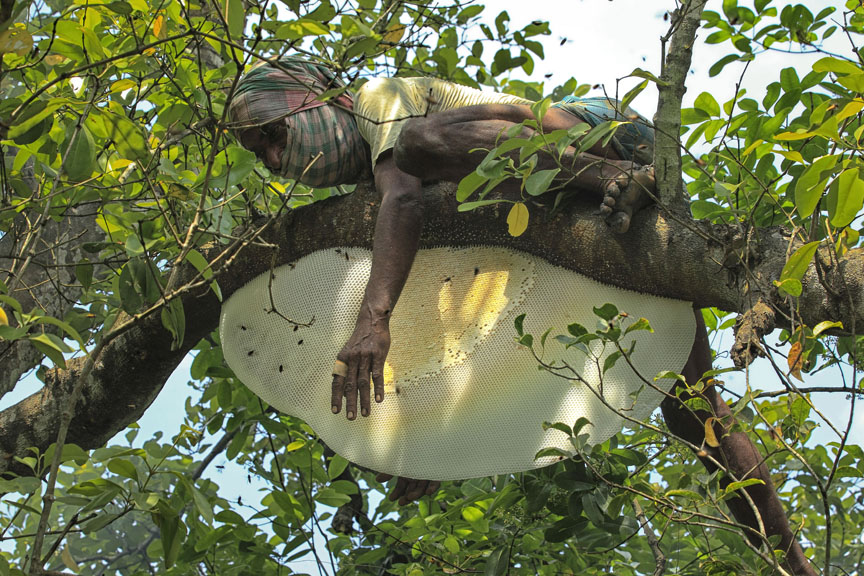 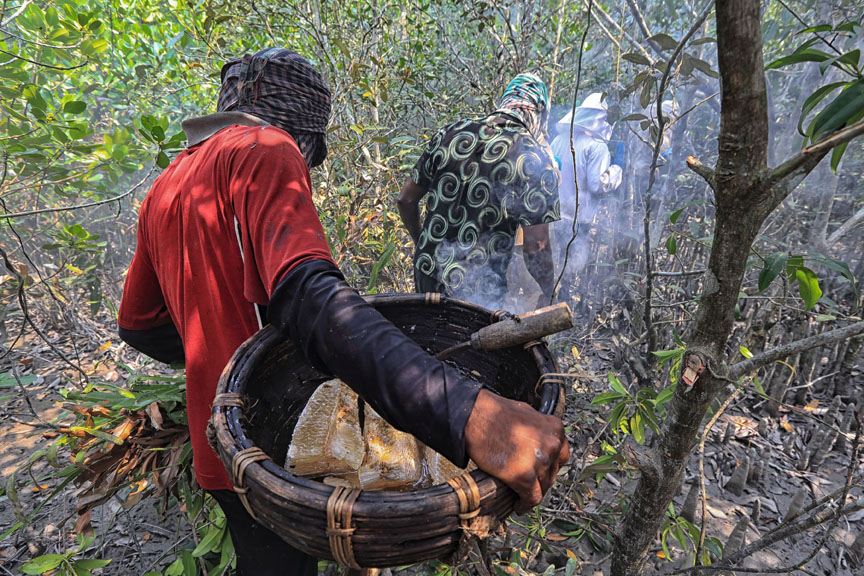 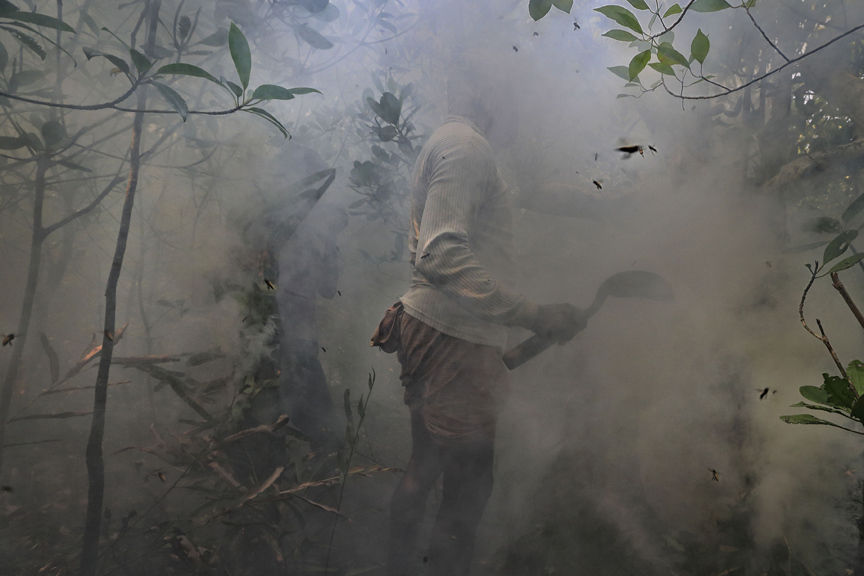 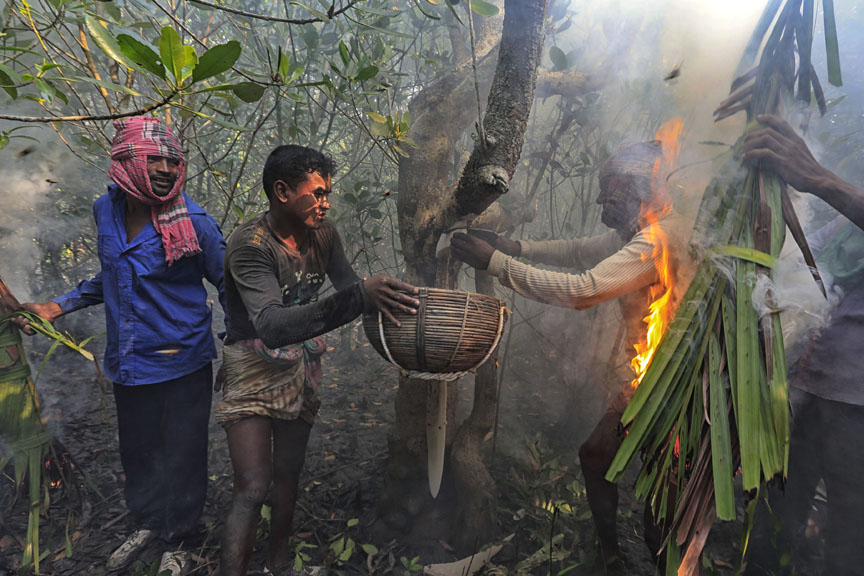 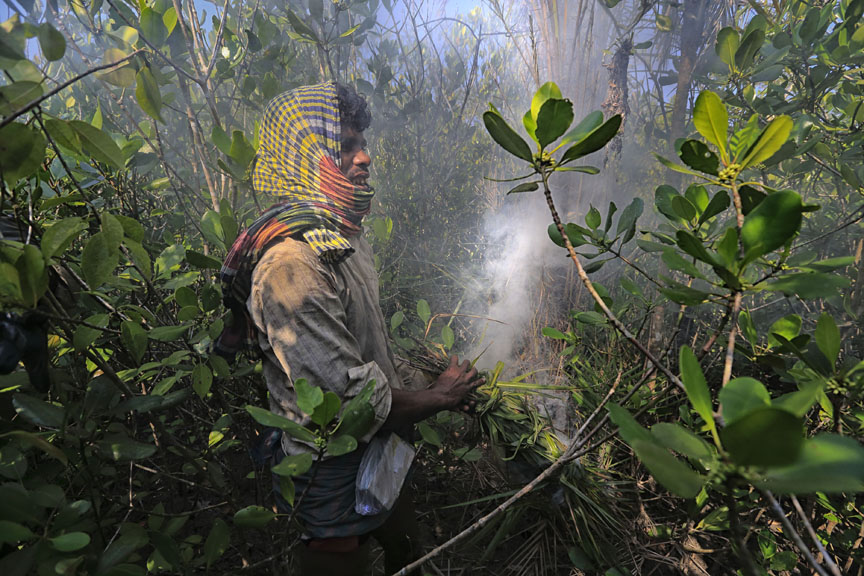 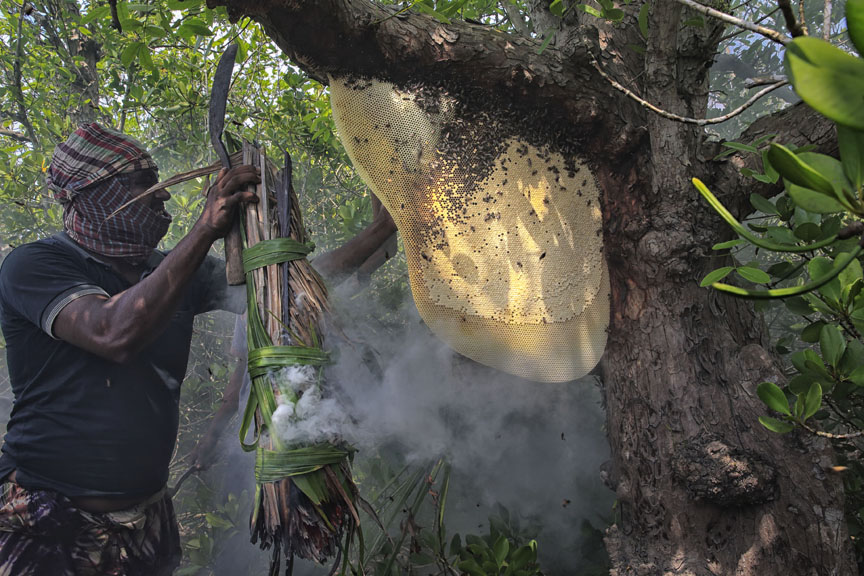 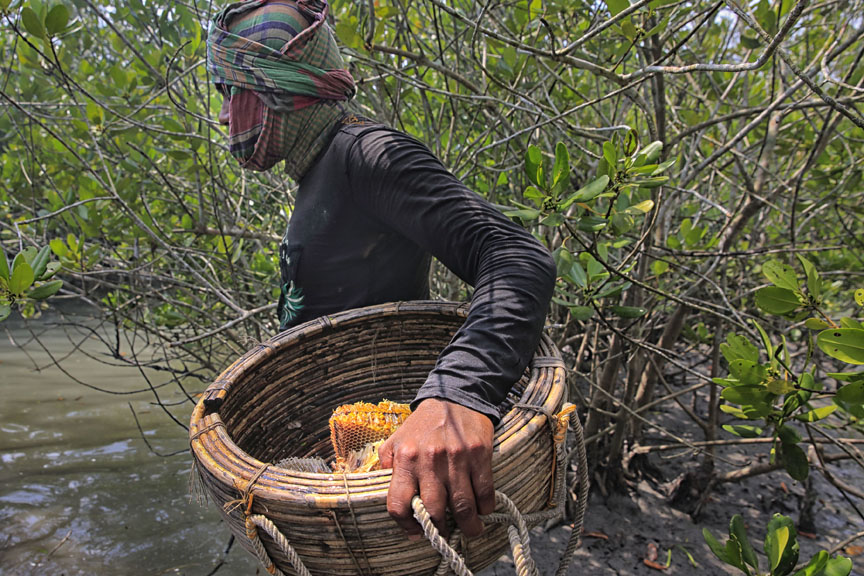 The annual honey gathering season brings lots of expectations in the southwest of the country, as it provides people with much needed extra income. On average, the fishermen earn around $70 to $80 (£42 to £49) each during the season. Honey gathering may sound like a normal rural occupation but here it is perhaps the most dangerous job in the world.

It was morning, ebb tide, when our launch slid up to the shore-shiny and metallic and unstable as mercury-and stuck its nose resolutely into the mud. Felt clouds sulked overhead, temporary protection from the blazing April sun. The honey collectors hopped one by one down onto the shore, which swallowed them up to their calves before releasing a thick, flatulent squelch. Like all the world’s mangrove forests-the low-slung tracts of salt-tolerant trees that line tropical coastlines from Brazil to Indonesia-the Sundarbans lives on mud and water, on silt and salt, its alien landscape treacherous even for the initiated, which I most certainly was not. April and May, the period of the honey harvest, are hot months virtually everywhere on the subcontinent, but here in the Sundarbans the heat is excruciating. Temperatures climb over 100 degrees Fahrenheit in the brutal pre-monsoon spring. The sun pounds the uncountable streams, rivers, and creeks like a blacksmith trying to flatten a crooked piece of tin. The heat pours through the loose weave of the salt-stunted canopy. There’s no breeze-just a hard, uncompromising humidity. In the course of the spring bloom, the bees will produce honey from as many as twelve species of trees, each distinct in flavor, texture, and color. Honeys from thegoran and passur trees are thick and red with little fragrance and a tendency to crystallize. Keora honey, though fair and thin (traits valued as highly in Sundarbans honey as they are in Bollywood actresses) is blandly sweet compared to the first and most prized of the Sundarbans honeys: khalsi. Pale gold in color, liquid and fragrant, subtle in its sweetness with a tart, almost peppery sting at the finish, khalsi honey lasts no later than mid-April and, once harvested, ferments within three months; honey hunting is as much a game of speed as endurance.